PACOM, a STANLEY Product and Technology company and leading provider of security and access control solutions, has announced that it has renewed its sponsorship of a Spanish cycling club. Valencia-based Club Ciclista DoYouBike-PACOM will once again benefit from investment in its equipment and activities, while PACOM’s corporate identity will feature prominently on members’ cycling jerseys and other collateral to enhance its brand awareness.

Club Ciclista DoYouBike-PACOM was founded in 2012 as a way to allow like-minded cycling enthusiasts in the region to meet, share their love of the sport, improve their times and enter various team-based events. Now a medium sized club with 45 members, it participated in over 40 events throughout Valencia and beyond in 2017, mostly in mountain biking leagues such as Circuito BTT Serranía, which has 10 races during the year. Club Ciclista DoYouBike-PACOM is also represented in Circuit MTB Valencia and Circuit BTT La Ribera, and has taken part in Orbea Monegros, 24h CycloCircuit, Titán de la Mancha and Vuelta Cicloturista Valencia.

Miguel Ángel Garcia, general manager at PACOM España, said, ‘We are delighted to once again have the opportunity to sponsor and support Club Ciclista DoYouBike-PACOM. One of our colleagues has been a member since the club first formed, so we all feel a great sense of attachment to it and have seen it achieve a number of notable successes. In 2017 the club achieved third position overall in the teams category of Circuito Serranía BTT, being the largest team in one race and the third largest in two others, and we look forward to watching it build on these achievements during 2018.’

Already this year Club Ciclista DoYouBike-PACOM came second in its first race at Marcha BTT Marines (Circuit MTB Valéncia) and aims to build on the third position achieved at Circuito Serranía BTT. PACOM’s sponsorship will help the club in these objectives by elevating the club to the next level, improving its overall infrastructure and helping to attract new members.

James Ford, marketing director at STANLEY Product and Technology, concluded, ‘We are very proud sponsors of Club Ciclista DoYouBike-PACOM and I wish all of its members the greatest success for this season and beyond. Not only does sponsorship allow us to support the club in its activities, it also contributes towards our corporate social responsibility based objectives and improves awareness of our position as the foremost provider of security and access control technology.’ 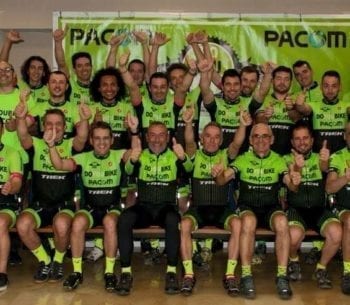