Home | Company | News & Events | Where the smart money is

Richard Joslin, PACOM’s Director of Sales UKI, CE, Baltic and MENA Region, examines the rise in “smash and grab” attacks on cash machines and what it means for banks, their customers, and local communities.

On 27 June 1967 the world’s first ATM – or automated teller machine – was unveiled at Barclays Bank in Enfield. An instant hit, ATMs soon went on to transform everyday banking for millions all over the globe. Today there are around 70,000 of these devices in the UK alone.

Although ATMs offer flexibility and convenience, with some of the larger machines holding $100,000 or more, they have always been attractive to thieves. Four hundred attacks on ATMs in 2014 rose to 723 in 2018, according to Cardtronics, with one in five incidents in Europe occurring in the UK. Despite this, thieves are often unsuccessful in their efforts, with just 41 per cent of attempts resulting in cash being stolen.

Most of us are familiar with stories of diggers being used to literally pull ATMs from the walls they are used in, but a recent trend is to blow machines open using explosive gases pumped into the device and detonated. Back in 2017 one 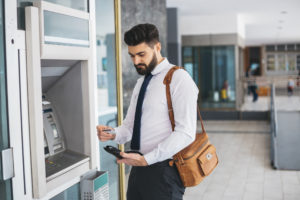 gang in the Midlands carried out 23 of these attacks in three months and stole more than £1.5m!

Explosive attacks are by far the most dangerous. One of the early UK attacks saw an entire Post Office destroyed.  Some thieves have gone to extraordinary lengths: in 2012 a gang spent months digging a 100 ft long tunnel, which had been fitted with lighting and roof supports. Once underneath the cash machine, the offenders cut through the concrete above to steal money from the ATM. Despite their efforts, they miscalculated when it would be full and only got away with a few thousand pounds! For all the time spent, the thieves didn’t even net the minimum wage!

The times they are a-changin’

With a growing number of ATM-related crimes and the growth of the ‘cashless society’, things aren’t looking too great for the humble cash machine.

In 2017, debit cards overtook cash as the UK’s most popular payment method and, according to Which?, 300 ATMs are closed every month. The Federation of Small Businesses has even launched a Save Our Cashpoints campaign, which is calling for a review to fully evaluate the impact the cuts will have on communities and consumers’ ability to use cash payments.

Despite this trend, cash is still a vitally important method of financial transaction – especially for the poor, the elderly and those in rural communities. The recent Access to Cash Review found that 25 million people across the country would struggle in a cashless society. So there will be a need for ATMs for some time yet. The issue for banks and independent owners and operators of these machines is how to protect them.

Many banks and service providers need to do more and, where possible, make greater use of perimeter surveillance, CCTV, access control and intrusion detection, gas detection equipment and gas resistant security enclosures, as well as anti-ram raid and anti-lift protection. Some security experts even recommend that all security measures should be advertised on exterior signage to make potential thieves think twice.

To a certain extent, one can argue there’s only so much that can be done to protect ATMs, and yet technology is constantly evolving and improving providing more effective tools. Working alongside a trusted security supplier to configure a comprehensive security strategy will provide a greater deterrent to those with malicious intent.