Creating an automated security solution for one of South America’s largest public transit systems is a challenge that requires the careful integration of security alarm, access control and video functions into a single monitoring location. Metro De Santiago was facing such a crisis when they turned to Bitelco Limited and PACOM Systems to design and install a sophisticated security system capable of protecting its one-million daily customers and for securing the transit system’s 59 separate stations each night from midnight to 5:00am, when the metro was closed.

Bitelco and PACOM created an automated security system that networks around-the-clock video surveillance, managed access control, smoke detectors and intrusion alarms from all 59 of the metro line stations to a downtown central monitoring building. The system uses live video to control the door access of after-hours maintenance crews, cleaning people and other authorised transit personnel at each of the 59 remote transit stations. PACOM’s Graphical Management System (GMS) also provides an automated alarm and event report, so that metro officials can tell exactly who entered and exited the stations during the monitored hours. GMS also creates programmed responses to handle reoccurring alarm events.

Metro De Santiago was recently awarded a prize from the Government of Chile for the overall cost effectiveness of its new security system and for reducing robberies and other crimes in its transit stations by more than 50% since the video portion of the system was installed.

“Bitelco’s ability to seamlessly integrate PACOM’s proven security products with Metro De Santiago’s existing network system was a big plus toward our winning this contract”, said Dario Diaz, Bitelco Commercial manager in Santiago, Chile. “We are pleased to be PACOM’s major distributor in Chile.” 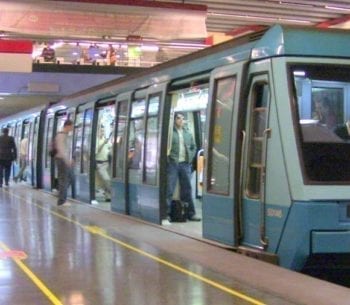